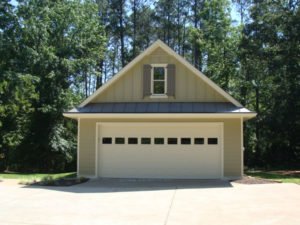 Do you want quotes for a metal or wood building?

Do you want quotes for a metal or wood garage building? 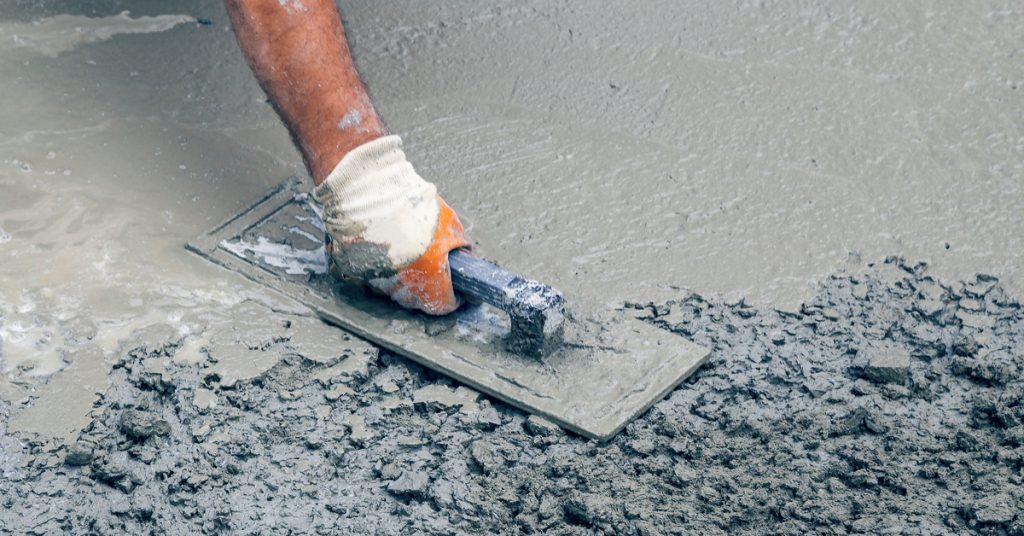 You Are Here | Home | How Concrete Works

History of Concrete – Concrete is a manmade building material that looks like stone. Combining cement with aggregate and sufficient water makes concrete. Water allows it to set and bind the materials together. Different mixtures are added to meet specific requirements. Concrete is normally reinforced with the use of rods or steel mesh before it is poured into moulds. Interestingly, the history of concrete finds evidence in Rome some 2000 years back. Concrete was essentially used in aqueducts and roadway construction in Rome.

It is said that the Romans used a primal mix for their concrete. It consisted of small gravel and coarse sand mixed with hot lime and water, and sometimes even animal blood. To trim down shrinkage, they are known to have used horsehair. Historical evidence states that the Assyrians and Babylonians used clay as the bonding material. Even ancient Egyptians are believed to have used lime and gypsum cement for concrete. Lime mortars and gypsums were also used in building the world-acclaimed pyramids.

Do you want quotes for a metal or wood building?

Do you want quotes for a metal or wood garage building?

However, Romans are known to have made wide usage of concrete for building roads. It is interesting to learn that they built some 5,300 miles of roads using concrete. Concrete is a very strong building material. Historical evidence also points that Romans used Pozzalana, animal fat, milk and blood as admixtures for building concrete.

The first recorded fact points to the year 1756 when John Smeaton, an engineer made the present day concrete by mixing coarse aggregate (pebbles) and powered brick and mixed it with cement. In 1793, he built the Eddystone Lighthouse in Cornwall, England with the use of hydraulic cement. Another major development took place in the year 1824. An English inventor Joseph Aspdin invented Portland cement. He made concrete by burning grounded chalk and finely crushed clay in a limekiln till the carbon dioxide evaporated, resulting in strong cement.

It was in Germany that the first systematic testing of concrete took place in 1836. The test measured the tensile and compressive strength of concrete. Another main ingredient of concrete is aggregate and includes sand, crushed stone, clay, gravel, slag and shale.

In 1886, the first rotary kiln was introduced in England that made constant production of cement. In 1891, George Bartholomew made the first concrete street in Ohio, USA. By 1920s, concrete found major usage in construction of roads and buildings. It was in 1936 that the first concrete dams Hoover and Grand Cooley were built.

There has been no looking back for concrete since its modern development. Known as the strongest building material, concrete has found major uses in dams, highways, buildings and many different kinds of building and construction. 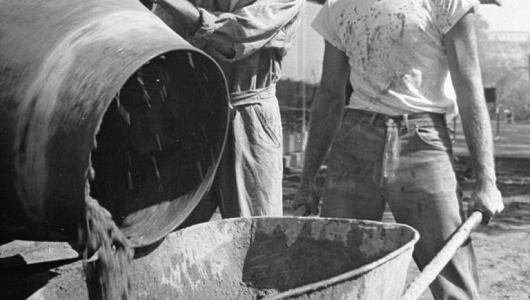 Concrete essentially has a high level of compressional strength, while the tensile strength of concrete is relatively very weak. As concrete can crack under its own weight, it needs to be reinforced. It is generally reinforced using steel bars or fiber and iron mesh. To reduce the tensile strength of concrete, it is also pre-stressed with the use of steel cables. The deciding factor for strength is also inherently related to the proportion and ratio of water and cement, the type of cement used and the strength of used aggregate.

Generally, concrete made using lower water-cement ratio makes a stronger concrete than when higher ratios are used. It is noticed that concrete made out of rough broken rock pieces is much stronger than concrete made using smooth pebbles. The reason is that the material should not result into more surface bondage area as this will increase the quantity of bondage, which is cement, resulting in weaker concrete. It is known that limestone possesses higher bonding properties than conventionally used gravel.

Workability of concrete means the ability of a concrete to fill the mould appropriately, producing the desired work without plummeting the quality of concrete. Concrete workability is achieved with the water ratio, shape and size of aggregate and the level of hydration. It is observed that workability can be considerably improved by increasing the quantity of water, or with usage of plasticizer. More water content can lead to bleeding and segregation, which can result in poor quality concrete formation.

Curing is a process that keeps the concrete intact by providing an appropriate environment. It is considered that good curing ensures a moist environment for hydration. This steady hydration results in low level of permeability, thus increasing concrete’s strength and quality. Concrete also needs to be protected from shrinkage. As concrete has low thermal expansion co-eficient, which means that it cannot handle repetitive expansion and shrinkage. If there is no external force used for expansion, it can result in sizeable force acting against it, resulting in shrinkage and cracking of structure. As concrete grows older, it goes on shrinking due to internal forces caused within the material.

Cracking of concrete begins at micro level. Normally, concrete is kept in a wet state to allow easy moulding when required. Hydration and hardening of concrete can lead to shrinkage and cracking when it has not yet developed the tensile strength. It is important to reduce stress before curing. Freezing of concrete before the curing is complete can seriously hamper the process of hydration. This can also decrease the concrete strength and weaken and damage the concrete.

Creeping is described as constant deformation of a material owing to internal stress taking place in the material. The amount of reinforcement of concrete structures ensures minimal shrinkage, creep and cracking.

These general concrete properties of concrete are taken care of during building of concrete. Depending upon the end application, concrete is accordingly treated for maximum strength and durability.

There are different types of concrete. One of the most popular concrete used is Portland cement, mineral aggregates and water. Concrete often solidifies as the cement hydrates and glues all the other components together. It has a high compressive strength and general uses of concrete include pavements, fences, gates, walls and more. In old times, concrete was often referred to as liquid stone. Sometimes external stabilizers are included to concrete to give it desired characteristics. Some of the major concrete types include,

The Self-compacting concretes use superplasticizers that accounts for the excessive fluidity of the concrete. It acts like a sticky self-levelling fluid that is combined using vibration.

Pump concrete consist of more quantity of sand than normal concrete. It is specifically made smooth to allow easy pumping from roadside to the construction site. Due to the increased quantity of water to make the concrete wet, it also requires more cement to attain the appropriate strength.

It is the most common concreting applications. The slump is + 15mm.

This concrete is used for casting columns and loads or any areas where concrete has to flow into position.

Special class might be any concrete specifically required by customers like pre-stressed concrete and light weight concrete.

Chipping concrete is made by passing the mixture between very small spaces, small size stones.

No fines concrete as the name suggests is a concrete with no sand in its mixture. It is a porous mass also known as a washed-out concrete. It uses water so that minimum paste remains stay at the bottom during placing.

Concrete mould wrapped in a mesh of iron rods is called reinforced cement concrete or RCC. Concrete with reinforced steel acquires the capacity to carry enormous loads. It is the most versatile material with a wide range of applications in construction.

It is interesting to note that over six billion tons of concrete is produced each year, and is the second most widely used substance. Concrete is specific to different applications like rebuilding, mending and construction. Concrete building components in different sizes and shapes are also made before hand and later applied. They include wall panels, doorsills, beams, pillars and more. Post-tensioned slabs is a preferred method for industrial, commercial and residential floor slab construction.

Ready Mixed concrete is durable and hard wearing and is used for variety of applications owing to its crack-resistance and durability. Situ concrete is cast in place, on site. Precast concrete finds application in concrete curtain walls, exterior cladding and structural walls, as it monolithic and can be easily used for two-way structural systems. It is also adjustable to post tensioning and easily adapts to any building shape. 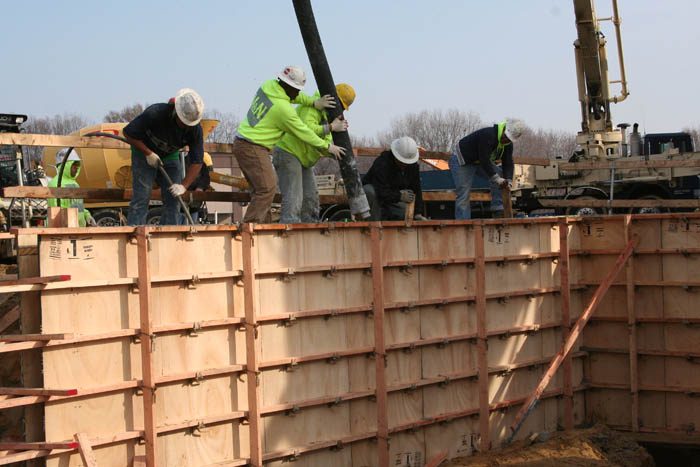 Cast-in-place concrete is an unhardened state, like ready-mix, and is placed in moulds. Ready mixed concrete is proportioned and mixed off the project site. It finds application in foundations and slabs-on-ground, walls, beams, columns, floors, roofs, bridges, pavements, and other infrastructure.

Controlled-density fill is used as structural fill, foundation pillar, pavement base an pipe bedding. It is also known as flowable mortar.

The life expectancy of concrete flooring materials is much more than other flooring material. It is used to enhance concrete applications and to add colour and texture to interiors, driveways, pathways and patios

Fiber cement is made using a mixture of sand, cellulose fibers and cement. It has a wood-like appearance, is durable and used for decorative shapes and trim applications.

It is a Portland cement concrete overlay on existing asphalt concrete pavement and used in airport pavements, highways, secondary roads, and other pavements.

Over the years, concrete has established itself as a sturdy building material used for different applications. The inherent benefits of using concrete as a construction material are durability, fire-resistance, low maintenance, energy efficiency and environmental friendliness. Owing its generic qualities, it is not surprising that concrete is used more than any other man-made material on earth.

Cement is often used as a synonym for concrete but it is actually just a material that is used to make concrete. Aggregate, cement and water are the main ingredients in concrete. If you are looking for a company to create a concrete patio or driveway you don’t want to look for cement companies, you want to look at concrete companies.

Residential concrete contractors do all sorts of concrete work including pouring concrete for slabs, driveways, foundations and patios. Concrete finishing work can be an art depending on the desired look. Some people choose to have a concrete stamp applied to their concrete which can add texture and design to the surface. A smooth finish can also be applied for a smooth floor like an interior floor. Broom finish is a common concrete finish, especially for pool decks and patios because it is less slippery when wet than a smooth concrete surface.

Whether you call it cement or concrete you can find the company you need for your project. Look for a concrete company in your area that meets the needs of your project and you can soon have a beautiful new patio or driveway.

Get FREE home addition quotes from several building contractors
and compare them! No obligation.
Then you decide.

Find a contractor you can trust.

Georgia Garage Builders – Down the humid region of the south, the carpet and granite capital of the world lies. While munching on grits, a breakfast delicacy of the state made from corn, why don’t you enjoy what Georgians would like to tune in? Chances are they’re cheering for the Atlanta Hawks or the Braves or the Falcons. Speaking of granite,

Arizona Garage Builders – Garages are part of a home or in another building still connected to the house where the residents park their cars and leave things in. It is typically fully enclosed like a small box house. Most of the time, garages are made of wood and steel that are meant to deter “carnappers”, thieves and withstand the elements